Skip to primary content
Skip to secondary content
Recently Blume, D’Agostino McGowan, Dupont, & Greevy (2018) published an article titled: “Second-generation p-values: Improved rigor, reproducibility, & transparency in statistical analyses”. As it happens, I would greatly appreciate more rigor, reproducibility, and transparency in statistical analyses, so my interest was piqued. On Twitter I saw the following slide, promising a updated version of the p-value that can support null-hypotheses, takes practical significance into account, has a straightforward interpretation, and ideally never needs adjustments for multiple comparisons. Now it sounded like someone found the goose that lays the golden eggs. 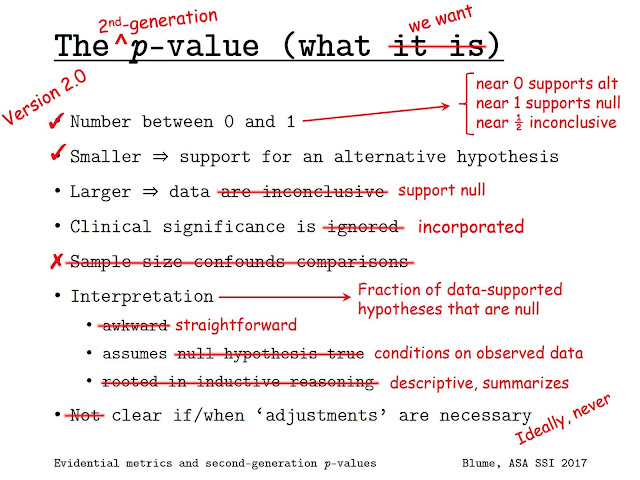 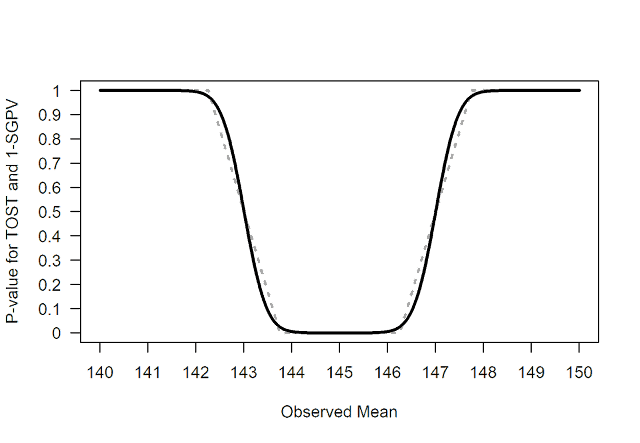 Figure 1: Comparison of p-values from TOST (black line) and 1-SGPV (dotted grey line) across a range of observed sample means (x-axis) tested against a mean of 145 in a one-sample t-test with a sample size of 30 and a standard deviation of 2.
It is clear the SGPV and the p-value from TOST are very closely related. The situation in Figure 1 is not an exception – in our pre-print we describe how the SGPV and the p-value from the TOST procedure are always directly related when confidence intervals are symmetrical. You can play around with this Shiny app as confirm this for yourself: http://shiny.ieis.tue.nl/TOST_vs_SGPV/.
There are 3 situations where the p-value from the TOST procedure and the SGPV are not directly related. The SGPV is 1 when the confidence interval falls completely within the equivalence bounds. P-values from the TOST procedure continue to differentiate and will for example distinguish between a p = 0.048 and p = 0.002. The same happens when the SGPV is 0 (and p-values fall between 0.975 and 1).
The third situation when the TOST and SGPV differ is when the ‘small sample correction’ is at play in the SGPV. This “correction” kicks in whenever the confidence interval is wider than the equivalence range. However, it is not a correction in the typical sense of the word, since the SGPV is not adjusted to any ‘correct’ value. When the normal calculation would be ‘misleading’ (i.e., the SGPV would be small, which normally would suggest support for the alternative hypothesis, when all values in the equivalence range are also supported), the SGPV is set to 0.5 which according to Blume and colleagues signal the SGPV is ‘uninformative’.In all three situations the p-value from equivalence tests distinguishes between scenarios where the SGPV yields the same result.
We can examine this situation by calculating the SGPV and performing the TOST for a situation where sample sizes are small and the equivalence range is narrow, such that the CI is more than twice as large as the equivalence range. 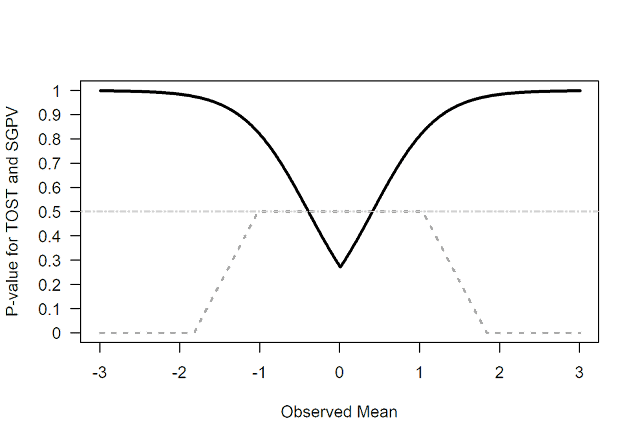 Figure 2: Comparison of p-values from TOST (black line) and SGPV (dotted grey line) across a range of observed sample means (x-axis). Because the sample size is small (n = 10) and the CI is more than twice as wide as the equivalence range (set to -0.4 to 0.4), the SGPV is set to 0.5 (horizontal light grey line) across a range of observed means.
The main novelty of the SGPV is that it is meant to be used as a descriptive statistic. However, we show that the SGPV is difficult to interpret when confidence intervals are asymmetric, and when the ‘small sample correction’ is operating. For an extreme example, see Figure 3 where the SGPV’s are plotted for a correlation (where confidence intervals are asymmetric). 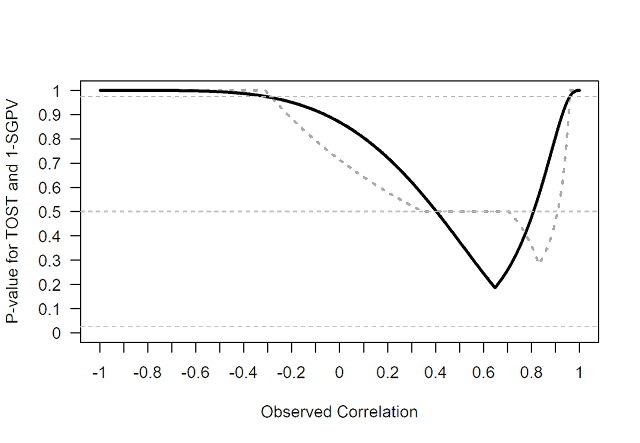 Figure 3: Comparison of p-values from TOST (black line) and 1-SGPV (dotted grey curve) across a range of observed sample correlations (x-axis) tested against equivalence bounds of r = 0.4 and r = 0.8 with n = 10 and an alpha of 0.05.
Even under ideal circumstances, the SGPV is mainly meaningful when it is either 1, 0, or inconclusive (see all examples in Blume et al., 2018). But to categorize your results into one of these three outcomes you don’t need to calculate anything – you can just look at whether the confidence interval falls inside, outside, or overlaps with the equivalence bound, and thus the SGPV loses its value as a descriptive statistic.
When discussing the lack of a need for error correction, Blume and colleagues compare the SGPV to null-hypothesis tests. However, the more meaningful comparison is with the TOST procedure, and given the direct relationship, not correcting for multiple comparisons will inflate the probability of concluding the absence of a meaningful effect in exactly the same way as when calculating p-values for an equivalence test. Equivalence tests provide an easier and more formal way to control both Type I error rates (by setting the alpha level) and the Type II error rate (by performing an a-priori power analysis, see Lakens, Scheele, & Isager, 2018).
Conclusion
There are strong similarities between p-values from the TOST procedure and the SGPV, and in all situations where the statistics yield different results, the behavior of the p-value from the TOST procedure is more consistent and easier to interpret. More details can be found in our pre-print (where you can also leave comments or suggestions for improvement using hypothes.is). Our comparisons show that when proposing alternatives to null-hypothesis tests, it is important to compare new proposals to already existing procedures. We believe equivalence tests achieve the goals of the second generation p-value while allowing users to more easily control error rates, and while yielding more consistent statistical outcomes.
References
Blume, J. D., D’Agostino McGowan, L., Dupont, W. D., & Greevy, R. A. (2018). Second-generation p-values: Improved rigor, reproducibility, & transparency in statistical analyses. PLOS ONE, 13(3), e0188299. https://doi.org/10.1371/journal.pone.0188299
Lakens, D. (2017). Equivalence Tests: A Practical Primer for t Tests, Correlations, and Meta-Analyses. Social Psychological and Personality Science, 8(4), 355–362. https://doi.org/10.1177/1948550617697177
Lakens, D., Scheel, A. M., & Isager, P. M. (2018). Equivalence Testing for Psychological Research: A Tutorial. Advances in Methods and Practices in Psychological Science, 2515245918770963. https://doi.org/10.1177/2515245918770963.
Murphy, K. R., Myors, B., & Wolach, A. H. (2014). Statistical power analysis: a simple and general model for traditional and modern hypothesis tests (Fourth edition). New York: Routledge, Taylor & Francis Group.

of love — lots of work that people do in their free time outside of their jobs.